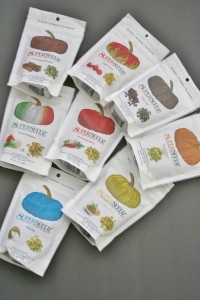 One of my favorite snacking foods is nuts – it really doesn’t matter the kind, I can snack on almost any kind. But I have come to love seeds – pumpkin seeds to be exact. I had never had them until a couple of years ago, but after that I would buy them in bulk and chow down, and they have easily become my favorite nut / seed. Don’t get me wrong, I love a good ole cashew or peanut like the next person, but there is just something extra yummy about the little green seed. And since they were never easily accessible and come in a can or container like other nuts, it was always a special snack since I only could get them from one stores bulk bin. But not now! These SuperSeedz are in your grocery store and online for easy access!

I was fortunate enough to get a box of these awesome little gems in the mail to review – and boy was I surprised! Not only were there the obligatory salted kind, but there were seven (7!) other flavors! One to burn your mouth off (Super Spicy), a couple to think your eating a pasta pesto dish (Tomato Italiano and Curious Curry) and a couple sweet things to hit that snack-spot (Cinnamon & Sugar and Coco Joe). All these flavors to make your snacking super-flavorful and savor-ful. These 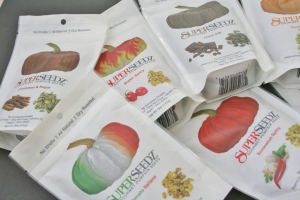 awesome pepitas were so intensely flavored that I didn’t feel the need to down whole handfuls at a time; I was able to munch on about a quarter cup (otherwise known as one portion) and be fine with it, no going back for seconds or thirds. Not only were they good snacks, but awesome in recipes! I had made an almost-fail not-too-sweet Pumpkin Caramel Popcorn and added the Sea Salt Seeds for a great little crunch. I also made some amazing sugary and spicy brittle-type Pumpkin Seed Bites that could burn your mouth off with the Super Spicy seeds in them, but were tempered with the brown sugar … okay, now I want to make them again!

All that to say that this small company was started by one woman, Kathy Pelliccio, who wanted to snack on something healthy, just like the rest of us. The difference between Kathy and the rest of us? She did something about it, and created these flavored gems … in her own kitchen no less! All she wanted was to create a small healthy-something to add for crunch to salads which she did by cooking up some simple seeds in her cast iron skillet; then she got fancy, and sweet, making some cinnamon and sugar ones for yogurts and oatmeals. This small company has blossomed into an enterprise with these seed packets being in nationwide stores like Whole Foods and Safeway, and even my local Giant store – which is not normal for this store! If you don’t have a local store that carries them, they are easily ordered online. We all love to hear stories of small entrepreneurs making it in the big bad world of retail – well this little company started by a mother of 5(!) did it, starting small then selling them at fairs, and now in stores.

Give ’em a try. They are awesome!

I received these seeds to review, but all opinions are my own – don’t worry, my honesty is real!