Picnic and summer holiday’s. Yum for both. And don’t you just love a play on words? Obviously I wouldn’t make (nor have I ever made or eaten) pulled pork on here but I wanted to do something that was reminiscent of picnic and backyard BBQ’s but also do it differently. Potato salad is my mom’s go-to for potlucks and summer get-togethers so that was a nobrainer for me. But I had to of course do it differently. Here is my vegan and gluten-free version of BBQ Pulled Portobellos with Roasted Garlic Herbed Sweet Potato Salad.

With Memorial Day right around the corner, as well as summer crashing in on us, I figured it was time I did a potluck-like post. Whenever my family has a get-together I either end up having a store-bought veggie burger or just pick at side dishes. Sometimes we get a portobello mushroom and toss it on the grill along with everyone elses burgers. But I wanted to make a main dish that would be easy to knock out while chit chatting with people and also one that could be made ahead of time and then just heated up. It’s too easy for words! Just chop your

onion and pepper and mince your garlic. In a saute pan pour half cup veggie broth and dump in veggies then turn the heat to medium-low and put the lid on to sweat out the veggies. While veg is heating, clean mushroom caps then use a spoon to scrape out the ribs of the mushrooms. Slice mushrooms very thin then dump into saute pan. Put lid back on only until the liquid has come out of the mushrooms then take the lid back off and mix. Let saute until all liquid is gone and veggies are starting to brown. Turn heat to low then pour in homemade BBQ sauce and mix until everything is combined and heated through. I had gotten a zucchini and used a sharp knife to slice it into thin strips to make “noodles” since I don’t have a zoodle-maker. This would have been awesome as a sandwich too!

You can’t have a bar-b-que without potato salad right? My mom makes the best potato salad and it is her go-to potluck dish. It is loaded with white potatoes and mayonnaise. But since I don’t like the taste of vegan mayo I decided to just go ahead and make a different type of salad, one with sweet potatoes and a tangy cream cheese sauce. I unfortunately don’t have a potato peeler so my potatoes didn’t get peeled, but I would recommend peeling the potatoes before chopping them into small like-size pieces. Also, a few weeks ago I had roasted a few bulbs of garlic and froze them – just roasted them like normal then squeezed the garlic into a small plastic container and used a fork to mash it up then tossed it into the freezer. Perfect for this salad! Start by washing and peeling your potatoes then chop into smallish pieces and boiling until just fork-tender. Drain the potatoes and leave in the strainer. In the hot pot dump in the sauce ingredients and mix then dump in the potatoes. Mix until combined. Enjoy this salad hot or warm. It is good cold, but awesome hot!

1. Chop onions and peppers into small pieces and mince garlic.
2. Pour veg broth into a saute pan and turn on medium-low heat and dump in veggies.
3. Put lid on and sweat out liquid until veggies are soft.
4. Clean mushrooms then use a spoon to scrape out ribs of mushrooms. Slice mushrooms very thin.
5. Dump mushrooms into saute pan then put the lid on to pull liquid out.
6. Once liquid is boiling take off lid and saute until all liquid is gone and veggies are starting to brown.
7. Turn heat to low then add BBQ sauce and mix until everything is combined.
8. Enjoy over noodles, zoodles, or as a sandwich. 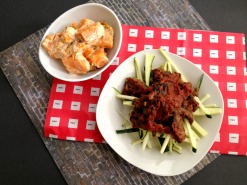