So this was a fun one.  It has been off and on cold here in San Antonio, so I decided to go Mexican with my lunches for the week.  I didn’t want to use the oven and warm the new apartment up with it being in the high 60’s.  Sounds silly, but this oven is high-power and can make the whole place hot.  Crock-pot is perfect, and how cool to make enchiladas in a crock-pot?

mm
mm
I new these would not be the enchiladas I had growing up.  Back then, those were hamburger and cheese filled (lots of cheese), and oh-so good…and fattening.  Mine were going to be veggied up and I wanted to try a few new things in them.  I am trying to add more fiber to my meals, so I bought lentils from Whole Foods bulk bins, and also got reduced sodium black beans.  No refried and fatty here!  I also wanted to try a sweet potato; my sister-in-law loves Alexia’s brand southwest fajita style veggies with sweet potato…I was leary in trying it because I am obviously a wuss when trying new foods, but it was good!  I am such a sweet when when going sweet potato and not a savory but I was greatly surprised that I liked it.

The whole process for these are so easy, it is just the baking in the crock-pot that takes the most time.  After I had gotten the enchilada sauce done and simmering, I put the lentils with enough water to just cover them in a small pot and let them come to a boil then immediately turned them down to simmer also.  I then put a large sauce pan on the burner and started with the veggies.

mm
mm
mm
mm
mm
mm
First I defrosted the onion and pepper fajita mix and cut up a medium yellow onion then got those going.  While those were tenderizing, I cut up two small zucchinis and a 9 ounce container of sliced mushrooms-I just gave those a rough chop.  When the onions and peppers were done I dumped them in a large pot, then put more oil in the pan and tossed in the zucc’s and shrooms.  While those were going, I defrosted my leftover stuffed pepper stuffing.  Yum-it still had the soy meat, different veggies and some rice also.  The defrosting got done about the time as the veg so I tossed them all in the big pot also.  I cut one large sweet potato and put it in the pan with oil to start the softening process.  While that was going I drained the lentils and tossed in the pot, and then opened and washed the black beans and tossed them in also.  When the potato was softened they went in too.
mm
When I started putting the enchiladas together, I remembered how much I dislike corn tortillas and how they fall apart on you when trying to roll them.  After the first one completely broke apart in the crock-pot, I heated 3-4 at a time in the microwave to soften them…it worked a little and they bent a little easier but each still broke when I laid them in them in the pot.  Oh well, not like it makes them taste bad if they are broken.
mm
**The only bad part about the crock-pot was the finished product came out more like the enchilada lasagna then actual rolled enchiladas.  It was still amazingly tasty, but next time I use the crock-pot for these I will just do the lasagna then rolling anything. 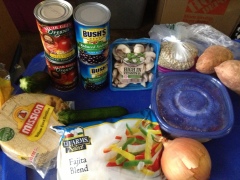 1.  Drop lentils in pot and cover, plus a little more, with water and bring to a boil.  Bring down to a simmer and let go until all ingredients are done.
2.  In large frying pan heat 1 tablespoon oil.  Defrost fajita blend; chop yellow onion.  Drop in to a frying pan and toss black and red pepper in along with garlic.   Soften all, about 3-5 minutes.
3.  Chop zucchini and mushrooms into smallish pieces.  Move onions and peppers into large pot.  Heat more oil in pan and drop zucchini and mushrooms in.
4.  Defrost leftover stuffing mix, about 5 minutes, if haven’t already had defrosted.  Cut sweet potato into small pieces.
5.  Drop leftovers, zucchini and mushrooms into pot.
6.  Heat 1 tablespoon oil and drop in sweet potato.  Let soften, not fry, about 5-6 minutes.  Open, drain and rinse both cans of beans and drop in pot.
7.  Drain lentils and drop in pot.  Open both cans of tomatoes and drop in pot also.  Drop sweet potatoes into pot when softened.
8.  Move pot onto stove top and bring to a bubble; just want all ingredients to be combined and heated through together to blend.
9.  Get crock-pot in place.  Cover bottom of pot with about 1/2 cup sauce.  Move pot from oven onto trivet next to crock-pot.  Heat your first 4 tortillas.
10.  Heat tortillas, fill and place in crock-pot; once you have your first layer filled-spread about a cup of sauce over the top.
11.  I did 20 tortillas total, with about 1/2 cup filling in each.  Once you have made all your layers, spread the rest of your sauce over the top and down the sides.
12.  Let cook about 2 hours.
13.  When finished, portion out for the work week (2 each enchiladas with 1 cup extra stuffing on the side per portion).  Freeze the rest.