September was an unbelievably busy month with getting ready to move, moving, and starting a new job. Add to that having no real stability that entire time and out the window went any type of diet. Or thought to how good I did in August with the Elimination Diet. I hate how I can totally want something, but totally be blind to what I need to do to get it. But, it’s a new month and I will get back to what I had before. And that was satisfaction in myself for what I had accomplished. So here is to October 2015 – New Year, New Resolution.

Well September was a total bomb to all the healthy eating I had done during August. While trying to get ready for my move I was doing okay, but move day and there-after? Nope, nothing good and didn’t get any better. I’m not surprised in myself, but I am disappointed. it’s always hard for me when I take a vacation, no matter how hard I try, to keep my focus on eating healthy. If I see one bad thing and eat it, it’s downhill from there. It’s what I call vacation brain. The other thing that fell by the wayside? Workouts! Yes, I also slacked off on my workouts! How am I supposed to be half marathon-ready if I don’t workout? Well … I’ll get there I guess. Somehow or someway, I will get myself ready for it, because I spent a ton of money on it so I will get there and through it! 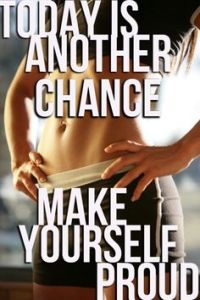 As for everything else? I got to my new city, Sac, amid a ton of layovers and planes having troubles and delays, and had a great time just doing nothing for a week (besides eating). I haven’t actually vacationed in a long time, and now I realize that it has taken a toll on me. I want to go somewhere and see someplace and experience things. Just getting stuck in a rut or constantly moving and then trying to play catch up isn’t doing much for me. So, time to start saving money! As for work – the people are nice and I got right into some (long) Fiscal Law training so at least I wasn’t sitting around twiddling my thumbs, which was refreshing! So once I get into the job it will be just like all the others I’ve had, but now I am around family which is what I was really missing … though it does take getting used to having people around all the time.

My October resolution? Do you even have to ask? Cause it’s getting back on the Elimination Diet bandwagon to get myself back in control and to also stop eating after 7pm. July and August redo’s. Because it’s ridiculous. The only thing that I will keep instead of eliminating is peanuts/less-ingredient peanut butter. Other than that I am mentally ready to get back on the bandwagon. Also, I am going to be

checking out gyms in the area to price them out and get in one. I can’t stand being away from a gym, especially not near one in the mornings because after-work workouts a hard to make myself do, and it’s time to get back into a gym! And yes, truly I really want to get back in one!

January: No Candy – no sweets!

February: Budgeting – money got saved and spent on moving

May: Workout Calendar and Challenges – Will need to figure this out for after the move

June: Get Out and About On Weekends – not so much with all the packing and cleaning going on

July: No Eating After 7pm – totally kept this up

September: Continue Elimination Diet, and add in a few items – Did Terrible!