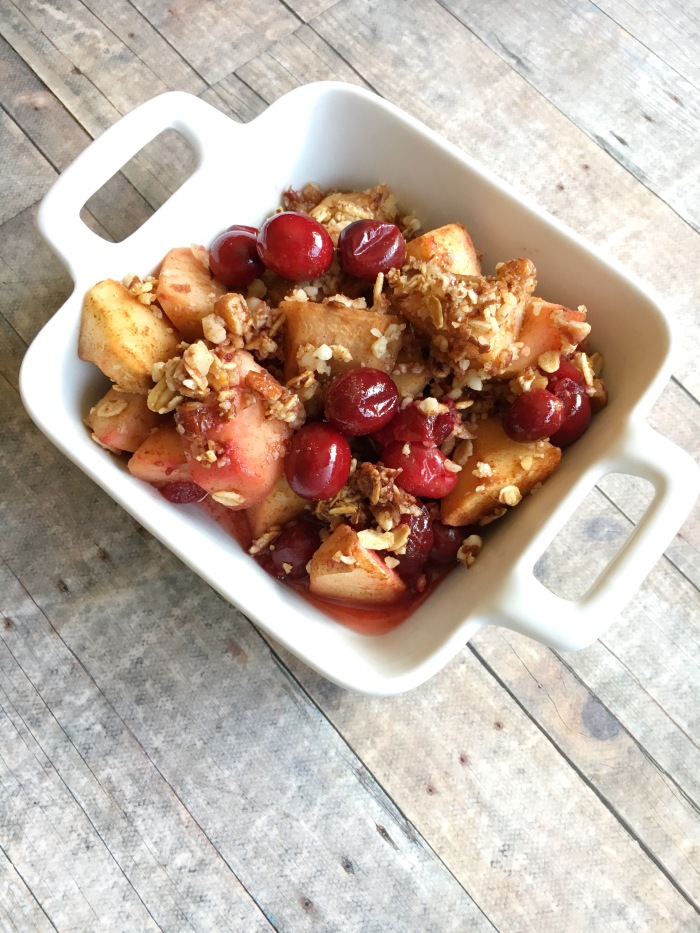 Mmm, cranberries just never go out of style. Especially when you need to make a healthy dessert recipe for Christmas and then have to remake it again for the New Year because you just have to ring it in with healthy treats … along with the unhealthy ones. When your trying to be healthy, treats are a part of the program, because as I have learned over and over – if you don’t treat yourself a little then you (me) are going to fail. So a vegan and gluten-free Cranberry Pear Crumble that is Elimination Diet friendly is the perfect dessert!

So yes, I really did make this recipe twice and I will tell you – this may seem gross – but it goes for bananas too. The softer and browner the fruit the more natural sweetness you get. So don’t throw out those brown pear, toss them into a baked crumble! I made this dessert Christmas morning and oh man! The smell of baking cinnamon and allspice is just what the holiday called for. I baked it in the morning and of course I tasted it fresh from the oven and it was sooo good. We didn’t end up having dessert until about 7 and it was still good! The tart cranberries pop in your mouth and it is so fun! And hilarious to hear them popping in other peoples mouths. I remade the recipe with fresh (read: hard) pears, and oh jeez just not the same. Not-yet-ripe pears don’t have the sweetness that older pears do, so it wasn’t as sweet as the first one – so use almost rotten (yes do it!) pears. It’s worth it, and you do it for banana bread so yes it’s okay.

This recipe is so simple. Peel and core the pears then chop into chunks and drop into your baking dish. Add everything except the cranberries and mix to coat. Add the berries then mix everything again then press gently into the dish. Chop the almonds then mix all the topping ingredients really well. Spoon over the fruit mixture to coat the entire dish. Bake at 350 degrees for 40 minutes. The topping? It’s like the most amazingly simple and healthy granola ever! It hardens into granola-like chunks and is just amazing. The (soft) pears soften wonderfully and the cranberries as just tart enough to handle. You don’t even miss the normal sugar because of the pears. Top with vegan whipped topping and enjoy! 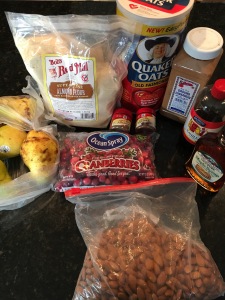 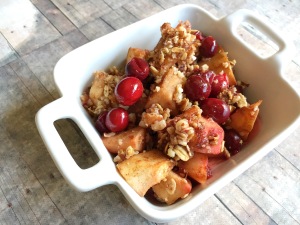 1. Set oven to 350 degrees.
2. Peel and core the pears. Chop into like-size chunks and dump into baking dish.
3. Dump in the cinnamon, allspice, nutmeg, vanilla, and maple syrup and mix well.
4. Dump in the cranberries and mix again.
5. Chop the almonds into smallish pieces.
6. In a small bowl dump all the topping ingredients and mix well – should be sticky and clumpy.
7. Sprinkle over the entire bowl and press together.
8. Bake 40 minutes.