Classic Thai flavors of peanut butter, cilantro, and lime all wrapped around some yummy veggies and stuffed into a zucchini. Doesn’t that sound awesome? I hadn’t realized it had been so long since I had stuffed some zucchini – and I only really think about doing that when it isn’t the summer and they are in season. Weird. But oh so good. Here is my vegan and gluten-free Thai Stuffed Zucchini Boats.

Start with washing then cutting the zucchini in half lengthwise. Spray cut side lightly with olive oil then sprinkle with black pepper. Flip them over so cut side is down then bake at 375 degrees for 30 minutes. While zucc’s are baking start the stuffing.

In a large saute pan heat a few tablespoons of olive oil on medium. Chop then dump in green onions and mushrooms and sprinkle with about 1/4 teaspoon salt to bring out liquids. Chop then drop the peppers, carrots, and spinach. Keep mixing. In the microwave, heat the peas and edamame; once they are warmed pour in pan. While the peas and edamame are in microwave make the sauce.

In a small microwavable bowl pour pb, soy sauce, vinegar, and all spices. After peas and edamame are done heat the sauce for one minute in micro and stir. Squeeze lime juice into bowl and mix. Wash and chop cilantro. Pour sauce and cilantro onto the veggies and mix well. Once zucc’s are done in the oven, take out and let cool slightly. Carefully scrape or cut out innards and chop and pour into pan with stuffing. Mix thoroughly. Spoon mixture into zucchinis and the leftovers into a pan. Bake for 15 minutes then enjoy! 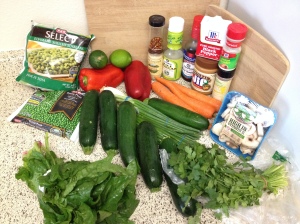 1. Heat oven to 375.
2. Wash then slice zucchini’s lengthwise. Lay on parchment covered baking sheet then spray with olive oil. Sprinkle with black pepper then flip over so cut side is down. Bake for 30 minutes.
3. Heat two tablespoons olive oil in large saute pan on medium heat.
4. Wash, chop, then drop in pan green onions and mushrooms. Sprinkle with 1/4 teaspoon of salt then mix.
5. Wash then chop each veggie and drop into pan: red peppers, carrots, spinach, mix after adding each veg. Keep mixing.
6. In microwave heat edamame and peas per package instructions. Once heated add to pan.
7. In small microwave safe bowl add all sauce ingredients. Microwave for one minute then mix. Squeeze in lime juice and mix again.
8. Wash and chop cilantro and add it and sauce to pan. Mix well.
9. Once zucchinis are baked take out of oven and let cool slightly. Carefully scrape or cut out insides. Chop the insides and add to pan. Mix well.
10. Spoon stuffing into hollowed-out zucchinis and leftover stuffing into oven safe pan.
11. Bake for 15 minutes.
12. Enjoy!